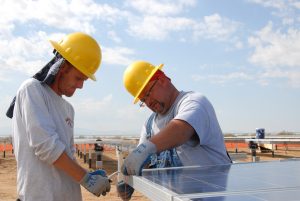 Unique compensation requirements apply to federal contractors. In the construction sector, the Davis Bacon Act (DBA) requires covered contractors and subcontractors to pay a specific prevailing wage and fringe dollars for each hour an employee works on a covered job site.

The regulations are difficult to understand for the non-initiated. Luckily, Lind Sawyer of Capital Strategies can make the confusing understandable. Here’s my conversation with Lind who was educating me on the finer points of the regulations. This could be illuminating for you too!

Anne-Lise Gere, SPHR – What are the risks of not complying with prevailing wage and fringe benefits for DBA contractors?

Lind Sawyer – The Department of Labor (DOL) is hot on the compliance trail. It recently announced a strategy called, “Plan, Prevent, Protect” to ensure these regulations are met. The DOL has teams of auditors who target federal contractors of all sizes. An audit from the DOL can be overwhelming, and the fines for noncompliance are expensive. The scary part is there is no formula for the fines. Fines are at the DOL auditor’s discretion.  I have seen an auditor shut down a worksite where the contractor and subcontractors were not in compliance. It puts small businesses at risk of losing everything. So this is a big deal.

When audited, federal contractors must be prepared to prove compliance and show that all regulations have been followed. This means being able to prove that the prevailing wage was paid for every hour, for every pay period and the fringe benefit dollars are properly allocated to eligible benefits.

Anne-Lise – Why is compliance so tricky for federal contractors?

Lind Sawyer – The DBA wages and fringe are often higher than what’s paid to the employees on a private sector job.  Some contractors are working simultaneous federal contracts and private sector jobs with individuals shifting between job sites frequently. It’s hard to keep track of which hours are on a DBA contracts and which are not.

Anne-Lise – How do DBA contractors operate in this context?

Lind Sawyer – Because many contractors don’t have a system in place to track and allocate the benefit dollars, they end up paying the higher federal wages and the fringe benefit to employees in cash.

Anne-Lise – What’s the problem of paying benefit dollars in cash?

Lind Sawyer – Paying fringe benefits dollars in cash creates a multitude of problems.  Most business owners are acutely aware of the added financial burden of paying cash instead of providing benefits. It can increase their overall labor costs by up to 30%. Every cash wage also raises the FICA, FUTA, SUTA, General Liability and Workman’s Compensation cost.

Fringe dollars are meant to provide additional benefits to workers on federal contracts. The DOL encourages fringe benefits to be used for insurance benefits (medical, dental, disability) and paid time off.

Unfortunately, most federal contractors are UNAWARE of the option of paying fringe dollars in benefits although it is in the DOL Regulations.

With the advent of paid sick leave for federal contractors on January 1, 2017,  it will be in the employer’s best interest to use those fringe dollars to fund the sick leave requirements.

Anne-Lise – So what’s a DBA employer to do?

Lind Sawyer – DBA employers should have a system in place tracking DBA hours, allocating prevailing wages and fringe benefits dollars in accordance to the regulations. Unfortunately, most payroll systems do not provide these functionalities.

At Capital Strategies we have developed proprietary software called Fringe Tracker. It integrates with the existing benefits and payroll companies. So it doesn’t disrupt the existing relationship with payroll provider and benefit administrator. It calculates the amounts to be allocated. Allocating fringe dollars to indirect compensation has a significant and meaningful impact on employers’ bottom line.

Anne-Lise – What are the most common fringe benefits funded by those federal dollars?

In a few words, put in place an additional system to track and allocate fringe dollars. At Capital Strategies, our software not only allocates the fringe dollars to different benefit categories, it also adds the wage differential between private sector pay and federal contract wages to fund the benefits in the most efficient manner possible.   By reducing the wage differential between federal and private sector jobs, we also reduce the temptation for inaccurate timekeeping by employees.

Our system automates compliance, applying the math calculations and recordkeeping according to the DOL Regulations, and generates profit by optimization of the fringe benefit payout.

For more information on how to comply with prevailing wages and fringe benefit allocation for federal contractors, contact Lind Sawyer at 757- 421-0411 or email her.